back in Rome and all is well


It’s great to be back in Rome and in the old stomping grounds. Almost all of my fellow deacons have arrived.


Today the brothers here made pumpkin pie from scratch for all of us – yum! As well – surprise, surprise – we had turkey!


In the afternoon there was a football tournament. My team was made up of two Mexicans, three Americans, one guy from Vietnam, and one New Zealander. After some pretty tough games, we went undefeated and took away the trophy.


I’ve been spending these days zipping around Rome, meeting up with old friends, reserving Churches for masses, looking for a chalice and vestments, and trying out new gelato shops. And praying!


Tomorrow begins our “How to be a priest” course. I guess we’ve been learning about that for a long time, but this course is kind of like a very practical review of everything.


Then a week from today our 8-day-long silent retreat before ordination starts. Can’t wait!


You are all in my prayers, please keep me in yours.


Ordination is one month away. Wow!


At my seminary the whole month before an ordination, we all pray a special prayer together. It’s called the “Litany of Our Lord Jesus Christ, Priest and Victim”. Pope John Paul II used to pray it at his seminary too.


Praying this prayer over the years has been a good reality check for me. It’s helped me see that becoming a priest isn’t some kind of promotion, rather it’s signing your life over to the service of God and his people, 24/7. It’s a giving up of your life, a becoming Jesus for those you meet each day. That’s a tall order, certainly, but I trust that God is the One who called me and he knows what he’s doing. He gives the grace that makes you a priest.


The prayer is below, and also attached in leaflet format for printing. I invite you to pray along with me for the 31 of us who will be ordained December 14th! 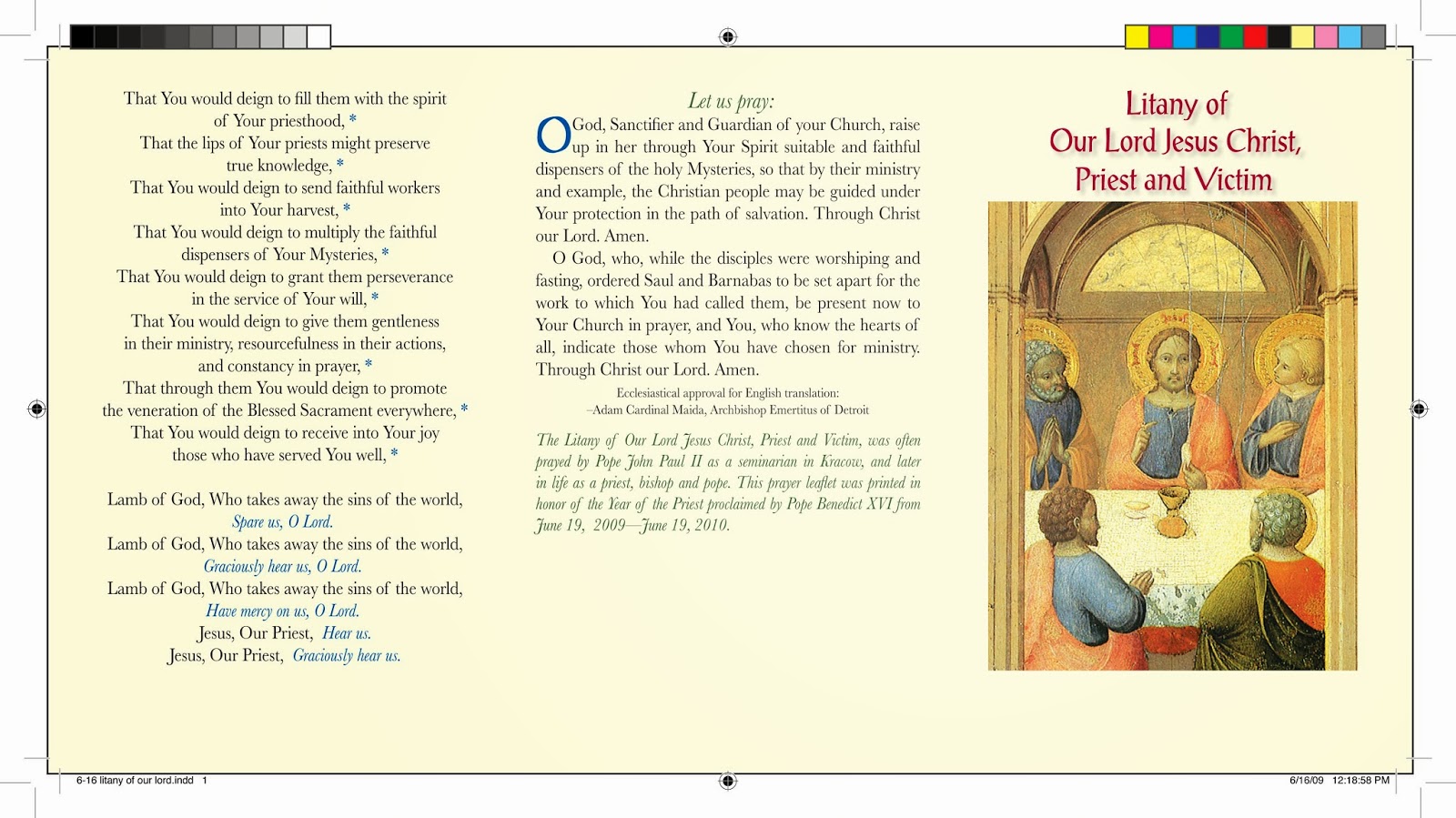 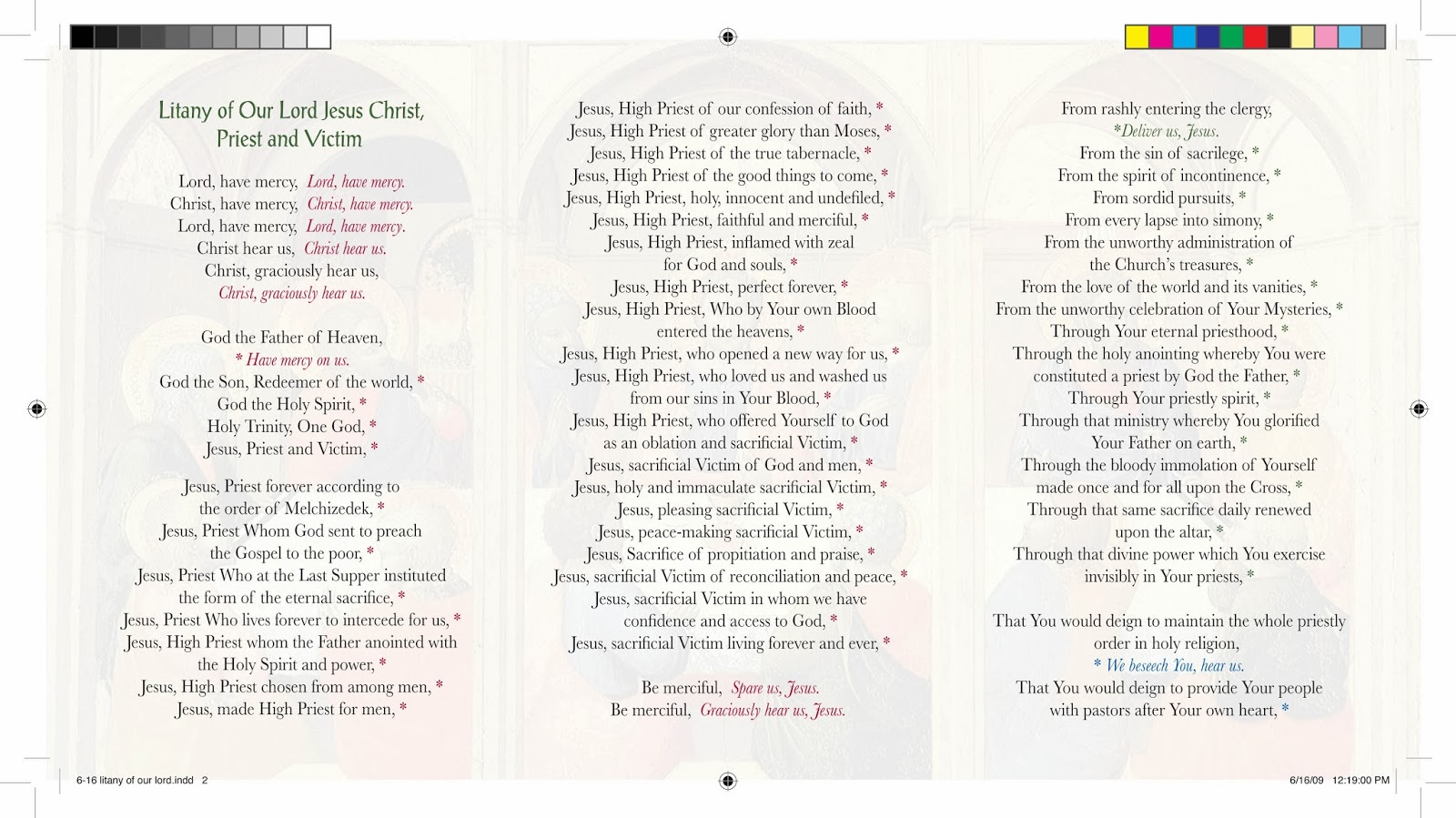 God our Father in heaven Have mercy on us.
God the Son, Redeemer of the world
God the Holy Spirit
Holy Trinity, one God

From rashly going on to ordination Keep us, Lord.
From the sin of sacrilege
From infidelity to the spirit of priestly celibacy
From using the ministry for sordid personal gain
From the slightest taint of simony
From administering the Church’s goods unworthily
From loving the world and its vanities
From celebrating your mysteries unworthily

Through your eternal priesthood Purify us, Lord.
Through the holy anointing by which God the Father made
you a priest
Through your priestly spirit
Through the ministry by which you glorified your Father
on earth
Through your self-immolation in blood, made once and for
all on the cross
Through that same sacrifice, renewed every day on the altar
Through the divine power that you exercise sacramentally
in your priests


Keep all priests holy and faithful Lord, hear our prayer.
Give your people shepherds after your own heart
Fill them with the spirit of your priesthood
May the lips of your priests preserve the knowledge of
your teaching
Send faithful laborers to your harvest
Increase the number of the trustworthy stewards of your
mysteries
Help the m to persevere in their service in accordance with
your will
Make the m gentle in ministry, capable in action, and
constant in prayer
Through your priests promote devotion to the Blessed
Sacrament everywhere
Welcome into your joy the priests who have served you well


V/ Let us pray:
Father, you guard your Church and make her holy.
Through your Spirit, raise up suitable and trustworthy stewards
of your sacred mysteries. Help them, by their example
and ministry, to guide Christ’s people under your protection
on the path to salvation.
Father, while the disciples were offering worship to
the Lord and keeping a fast, you told them to set Barnabas
and Saul apart for the work to which you had called them.
Listen once again to your Church gathered here in prayer,
and since you can read everyone’s heart, show us whom you
have chosen to receive the office of ministry. We ask this
through Christ our Lord.
R/ Amen.

Posted by Kevin McKenzie at 6:33 PM


The other day I was assisting as deacon at mass at a local parish. Before communion, I helped the priest divide the communion hosts between all of the vessels so we could give communion to the people. This can be a tricky procedure, because it’s always difficult to transfer the hosts with none falling out of your hands. But usually you just take your time, and there are no problems.


But this mass was different. As soon as we started moving the hosts, one fell to the floor. This is no small matter, since as Catholics we believe that a consecrated host is the body of Christ, as Jesus explained in the Last Supper. Father quickly stooped and picked it up. Then another host fell, and another. I picked up one that rolled behind father and put it back on the altar. “This is getting really hard!” Father said. I agreed. It wasn’t like we were being overhasty or disrespectful. It just seemed that the hosts wanted to roll away for some reason.


Anyway, communion afterwards went as normal. Mass ended, and everyone went there ways. I had to help at another mass, so I sat in the front of the Church to pray a little as I waited.


But I couldn’t really pray and I thought to myself, “I wonder if we found all the hosts. I better double-check.” So I went up and looked around behind the altar. No hosts. I was about to go back to the pew when a little flap of carpet caught my eye. It was a service panel for the microphone. I fidgeted with the handle and managed to pull it up. There, in the bottom of a small electrical box I saw something white covered with dust. I reached down and fished it out. It was a large piece broken from a big host, maybe 2 inches across.


I was kind of flabbergasted. When you find a host like this, there’s a very specific set of rules you’re supposed to follow out of respect for Our Lord. And first I decided to check with Father to see what he wanted to do.


It turns out that was over four years ago. The host had been there for at least four years, if not longer.  And it was definitely a consecrated host, because you don’t break the host until after the consecration.


No bugs or mice had gotten to it, miraculously.


It was like Jesus was jumping off the altar so that we’d know he was also trapped in the floor. Like he was saying, "Rescue me!" Wow.


Makes me grateful that he still wants to stay with us even after all he’s been through!


May God bless you, and come into your life,
Deacon Kevin


PS - Here are some photos of the kind of thing I'm doing a good bit of now - running weekend retreats for boys. We had one last weekend at a family's ranch in southern Indiana, and it was a blast. The boys played all kinds of sports, including some we've invented, and there was time for the sacraments and spiritual talks. I love these retreats, not only because I get to play capture the flag, but because you can touch how God works in the lives of these boys. In one of the pictures I'm giving Benediction ( a blessing with the Eucharist) to the boys. It makes me feel so little to be able to serve our great God in this way.
Posted by Kevin McKenzie at 6:38 PM

Dear Family and Friends,
This weekend I had the opportunity to preach all four masses at a local parish.
Phew! Four is a lot!
But it sure was a learning experience. Preaching in large churches is no easy task – you have to speak slower and louder.
All in all, it made me understand a little what Jesus must have felt like after preaching that Sermon on the Mount of his – tired, but energized too!
Thankfully, there were donuts after each mass. That kept me going.
Happy feast of Blessed John Paul II. He was such a great gift to all of us. I’m hoping to take a group of fathers and their sons to his canonization (when he becomes a “Saint”) April 27th next year. Can’t wait!
May God bless you,
Deacon Kevin
Posted by Kevin McKenzie at 3:26 PM