I think it was when I was pouring over the hand-written fifteenth-century manuscript in the oldest library in Ireland and discovered a tiny drawing of a little monk’s head that I realized I was really having fun.

It was all part of my research trip to Ireland for a book on the life of Saint Kevin.

I wrote about why I wanted to write the book here. After putting together a gofundme campaign, I told Saint Kevin that if he wanted me to write a book about him then he’d have to come up with the funds! Lo and behold about a week before I was set to leave, exactly enough money came in. Thank you to everyone who contributed!

The first part of my trip was spent with the High School seniors from Royalmont Academy, the school where I am chaplain. We climbed mountains and visited churches, castles, and towns galore. We went to mass with the Irish people. Some of us made it to the top of Croagh Patrick, even though the wind was strong enough to knock you down and it was snowing up top. Others got to ride an Irish Clydesdale. I got to celebrate my first Easter Vigil and Holy Thursday masses as a priest. We visited the cliffs of Moher, Trim Castle, Dublin, Galway, The shrine of Our Lady of Knock, and much much more. They taught me how to play the "family game"—fun!—and also introduced me to a lot of lively new music I had never heard. We had a blessed time together.


After sending them on their way home at the airport, I set to work on my Saint Kevin research. Kevin is a hard nut to crack because he died in 618 and almost everything we know about him dates to much later. For centuries, there was just an oral tradition about his life.

My original plan had been to spend my time in Ireland actually writing my book, but it quickly became apparent that research was the name of the game—there is very little out there about Kevin, so I was going to have to dig. I needed to put flesh on the bones of his story.

My new goal became to visit every single place where Kevin lived and to talk with anyone who knew anything about him. This started at one of my favorite places, Marsh’s Library in Dublin.

Founded in 1701, it is the oldest public library in Ireland. The books are ancient, and they are kept in the same arrangement as in the 1700’s. Back in those days, while you read a book you were locked in a cage. They still have the cages!

I came for the oldest life of Saint Kevin, contained in a handwritten latin manuscript called the “Codex Kilkenniensis.” It’s over 500 years old. The librarian was kind enough to let me examine and photograph the manuscript for about two hours. No, they didn’t lock me in a cage, though they did have someone watching me the whole time. It was in the pages of the Codex that I found that 500+ year-old illustration of a little monk’s head.

As we speak, I am working on my own translation of the Latin life using the photos I took of the manuscript. It’s quite fun!

While in Dublin I wanted to visit the place where Kevin allegedly went to school, Kilnamanagh. But when I got there, it was all houses and shopping centers! I was about to give up when I saw a sign for Saint Kevin’s Parish. 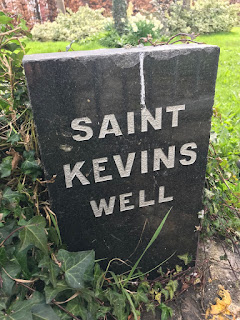 The church was quite modern, but the parish staff welcomed me and told me all they could. Turns out the developer who built the houses had knocked down the remains of the monastery and an old castle to make way for the construction.

That was when Enda spoke up. He was the groundskeeper of the parish, and he explained that there was still part of the monastery left. One piece of land flooded so regularly that the developer couldn’t build on it. So he gave it to the parish. It was the place where Saint Kevin’s Holy Well is. 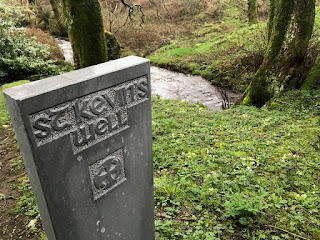 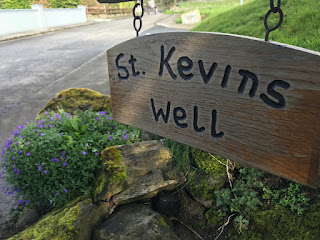 Enda took me to the well, which sits right smack dab between two houses. It was a little green space in the middle of the neighborhood. Kevin’s holy well sits in the back left corner of the lot. It was the first of three holy wells I found dedicated to Saint Kevin. He's quite popular!

That was the start of my location research. Next I visited Clondalkin, where Kevin was allegedly baptized. It’s a bustling suburb of Dublin with an ancient stone round tower sticking up right in the middle of all the hubbub.

Saint Kevin ran away from school when he was quite young to be a hermit in a place called Hollywood. I went there and visited the cave where he lived and the hunk of stone called Saint Kevin’s chair.

But Hollywood wasn’t secluded enough, so Saint Kevin traveled to what I believe is the most beautiful place in Ireland, Glendalough. And in Glendalough I spent most of my time.

Glendalough—Gleann Dá Loc—means “valley of the two lakes”. Here Saint Kevin found solitude at first in a hollow tree, then in an impossible-to-reach cave (Saint Kevin's Bed) in the middle of a cliff above a lake. Further down the valley Saint Kevin established a monastery that eventually grew to be a center of learning and culture with thousands of inhabitants.

I walked the trails and visited the ruins of the churches and met with the curator of the Visitor’s center there. I also talked with Father Thady Doyle, a priest who is an expert on Saint Kevin and runs a small chapel and bookstore nearby.

One day I took a road trip to Northern Ireland to visit Adrstraw, where Kevin spent some time helping his uncle found a monastery. Another day I hiked the 19 mile Saint Kevin’s Way, an ancient pilgrimage route following Kevin’s first trip from Hollywood to Glendalough. A local dog named Charlie accompanied me about 9 of those miles before I called his owner, who picked him up. Charlie was my guardian angel!
The stories we have of Kevin’s life are great reading. My favorite is how Kevin was praying one Lent with his arms outstretched in the form of a cross. As he prayed, a blackbird landed on his hand, built a nest, and laid its eggs. Kevin held his hand out for days on end until the eggs hatched, the baby birds grew up, and then finally flew away. When asked why he did such a thing, Kevin said that the pain in his hand was nothing compared to the pain that Jesus suffered for us on the cross. Wow!

Animals appear in many of the stories of his life, and Saint Kevin is kind of the Francis of Assisi of Ireland. An otter used to bring him a trout from the lake every morning for his breakfast!

Right now, I’m going through my research and especially working on translating Kevin’s life from the Latin. God willing I can put together an engaging book about his life, much like what I did for Saint José.

Talking of Saint José, my publisher sent back their most recent corrections, and I’ve been working through them. They catch everything—thankfully—so I’ve been polishing and tweaking all kinds of little details. Hopefully that book will be published this Spring!

So that’s my update. Again, many many thanks to everyone who helped sponsor my time in Ireland. Before going, I didn’t feel like I had the ingredients for my story, but now I do, thanks to the time I was able to spend there. I don't want to just write a history book, I want to make Kevin's story come alive so that his witness can inspire many. Walking the paths he walked, seeing the sights he saw, the smells he smelled, the sounds he heard, even trying the" Saint Kevin Cheeseburger" at a local pub--I think my research trip was well worth it.


I will try to keep you all informed on how the writing goes!

May you all have a blessed fall!