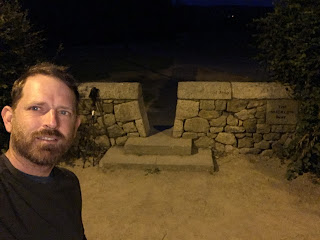 I was so tired last night, once I laid down in my hammock, the lights truly went out. I slept for nine hours, until the sun and wind woke me up.

Yesterday was my last last day in Ireland. My bug bites woke me up around 4am and I couldn’t get back to sleep. So I decided to try to make the 8am ferry from Dublin to Wales. Only one thing stood between me and my goal: the city of Dublin. Oh, and the fact that my phone wasn’t working so I was relying on a very sketchy memory of the route I should take across town.

I walked the last bit of the Wicklow Way, until I reached Marlay Park, where it ends, and through which my route took me. But the park was closed, gates locked. Surely they had forgotten about early hikers like me!

I climbed over the gates, finished the Wicklow Way, then continued on to the other side of the park and climbed out the other gate.

Then I started my trek through still-very-asleep-Dublin.

Then, little by little, the sun rose and the city began to shake off its sleepiness. And just as it started to bustle, I stumbled upon what I had been looking for: a path that followed the river Dodder through almost the length of the city. 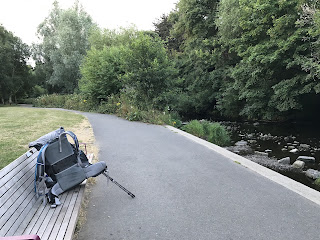 The Dodder is small, almost really a stream where I met it, but there is a path along the whole thing. There were herons, and trout, and water lilies galore. There were pretty foot bridges across the river, and waterfalls, and forests. I stopped at one bridge and talked to a lady who was taking photos of the herons, Mary. 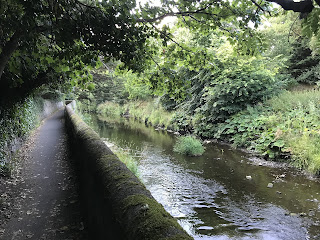 As luck would have it, I arrived, a very weary walked, at the ferry terminal just as the ferry pulled away. And so I had four hours to wait.

I took a bus into town and bought a power cable for my phone, from which I gleaned that I could make mass at the pro-cathedral. I like to go daily, but my pilgrimage doesn’t make that possible. So it was nice to be able to go!

Afterwards I went to confession, and had a fascinating conversation with the priest. It turns out he knew quite a lot about Saint Kevin and his times. I had always thought that Saint Kevin chose Glendalough for his monastery because it was a remote place where he could be alone and pray. And today it is very much an end-of-the-road kind of place, remote and quiet. 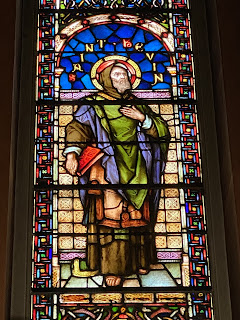 But in Kevin’s day, the priest explained, Glendalough was at the crossing of three very important roads: two that passed through the mountains and one that went from north to south. Kevin chose to put his monastery at the crossroads.

I’m so glad I met this priest! I’ll need to rewrite things a bit, but I love when I uncover a bit more of the truth about a saint. 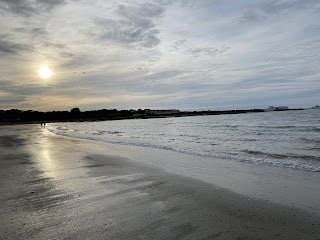 Anyway, the ferry ride was really fun, and I arrived in Wales yesterday evening. I started my walk along the coast, the sun slowly setting behind me. Along the way, I came across a boy, Moe, kicking a soccer ball into a goal. So I challenged him to a penalty shootout. He’d have ten shots and I’d be goalie, then I’d have ten and he’d be goalie.

We’ll, let’s say that,… I thought I was better at soccer! He scored seven goals and I scored three. But it was hands down the most beautiful place I’ve ever kicked a soccer ball—on a field looking out across the Irish Sea, with the sun setting in all its glory.

I took today off and just rested and slept. Tomorrow I’ll continue my trek across Anglesey Island.

Posted by Kevin McKenzie at 3:05 PM