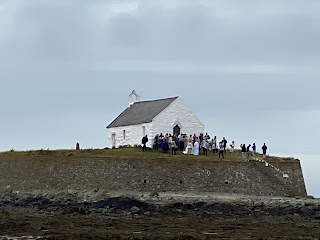 Saint Kevin is guiding me, I really feel it.

Today I was walking a long the southern coast of Anglesey Island, 100-foot sea cliffs beneath me, a wild sea swirling and smashing itself below. I hadn’t checked my map for a while, when two women appeared from around the corner and asked me for help.

They had gotten lost a bit and couldn’t seem to find their way to a little church they wanted to see.

Together we realized that we had all gotten off the path, so we headed back towards it. One of the ladies was 75, and she was afraid of cows. But we had to pass through a field with cows to get back on the path. So I bravely led the way.

When we finally got to the church, the church of Saint Cwyfan, I was in awe. It was set on a tiny tidal island in the middle of a bay. All white, with a slate roof, it shone in the midday sun. And there was a wedding going on inside. My two friends wanted to visit it because they had been to a wedding there before.

So we all ate lunch outside while the wedding went on inside.

Eventually I said goodbye and continued on down the coast.

Then later in the day I saw a sign for another church, Saint Cadwaladr’s. There was a lady inside cleaning the church. She gave me the grand tour, showing me ancient stained glass windows and even more ancient inscriptions and gargoyles. I told her about my quest, and she asked if I had been to Saint Kevin’s church. I told her of course, I had been to saint Kevin’s Church in Ireland. She said, no, the one down the coast. In Welsh, Kevin is Cwyfan.

My jaw almost hit me in the knee.

When I planned this pilgrimage, I used guesswork to make a route I thought Kevin might have possibly taken. Even the experts on Saint Kevin that I talked to had no idea which route he would have chosen.

And yet there I had been, almost certainly on the exact route Kevin took. The bay where his church is located is called “Porth Cwyfan” or “Kevin’s Gate”. I take that as meaning the place Kevin landed on his way from Ireland to Rome.

And it’s certainly like Kevin to choose the most fantastic of places to build his churches.

Yesterday I did 12 miles. Yesterday was a bit harder because it started to rain. I’d been blessed with no rain, so it was quite a shocker.

But I got some fish and chips and holed up to let the storm pass away.

Highlights these days are too many to write about, so here’s a list:

- finding giant crabs in an estuary

Yep, lots to see and remember. And I’m grateful for Saint Kevin’s guidance.

Tomorrow I have to decide whether I head North or South. The Northern way would be longer but have less elevation change. The southern route is shorter but has lots of mountains. Which way would Kevin have gone?

Say a prayer I can figure it out!