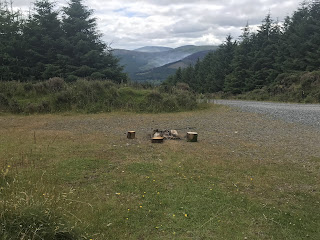 My phone died last night before I could post to my blog. Which was ok.

I enjoyed a quiet, distraction-free day.

It would have been nice to have the mapping feature from the phone at least. There were several junctions that had no trail markings at all. One time I had to whack down several giant Irish ferns to find the signpost. But somehow I managed to stay on the trail as it made its way through river valleys and over high ridges.

I ran out of water as I came into the picturesque valley of Glencullen. There a grandmother filled my water bottles for me while I showed her two-year-old grandson, Daniel, the deer skull I was carrying. He was fascinated, and didn’t want me to go. 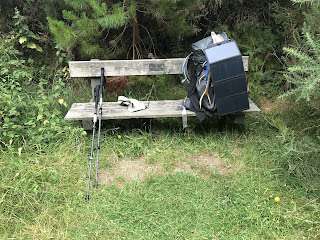 While walking by “Fairy Castle”, the peak overlooking Dublin, I saw some other hikers grab something from the bushes on the side of the trail ahead of me. When I got to where they had stopped, there were a few bushes chock full of bilberries. I had them for supper and there are plenty more for breakfast.

My muscles really ached when I woke this morning, I guess the result of hiking twelve miles yesterday. We’ll see how they feel tomorrow, I’ve already done 30 miles, most of it either walking down hill or up.

My plan tomorrow is to walk across Dublin and catch a ferry to Wales. I hope to be able to find an outdoors store along the way to buy some essentials. One of them is a water purifier. I have a water filter, which I thought would be enough to clean the water I drink from streams here. But after getting sick that first day, I think what I really need is a water purifier. There are sheep everywhere here, so what seems like a nice clean stream might have some contamination, and I don’t want to take any more chances.

I also need a knife, something I couldn’t bring on the plane.

And my charging cables! Thank God my IPad has a long-lasting battery. It’s what I’ve been writing with. But it doesn’t have cellular, and it’s hard to take it out to take pictures with. I’m sure there’ll be a store somewhere.

Let me leave you with a little poem I wrote after a little nap I took today. It’s the story of my nap :)