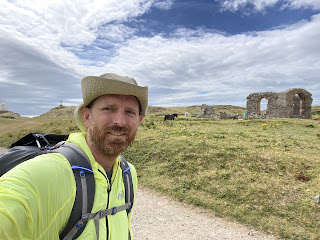 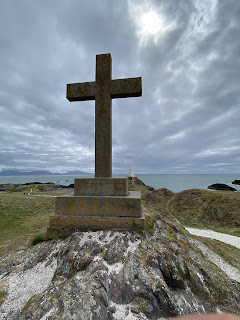 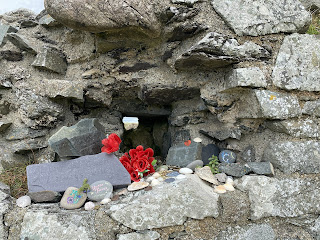 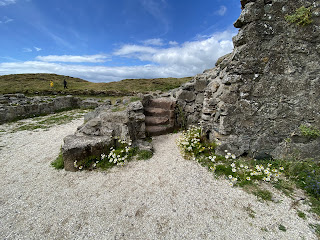 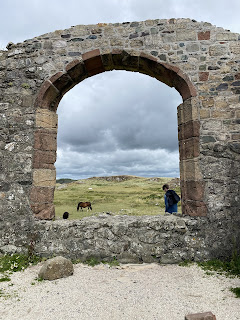 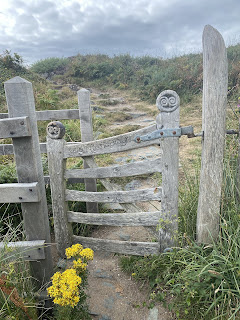 I didn’t get too far today—8 miles—because I was enchanted by an enchanted island. I spent four hours there. Yes, Ynys Landdywn—the island of the church of Saint Dwynwyn.

Legend has it that she was the most beautiful of the twenty-five daughters of the king of Wales. When the king promised her in marriage to a young man whom she did not love, she ran away to a forest, where she met an angel who granted her three wishes:

1) That her sweetheart, who was frozen in a block of ice, be freed.

2) That she be able to help all true lovers

3) That she be allowed to never marry

The angel granted her all three wishes, and Dwynwyn went to her island to be a nun.

The island is pretty neat. Like Saint Cwyfan’s island yesterday, it is a tidal island that is only accessible at low tide.

There are wild horses and ponies on the island. There is also a lighthouse.

What is most enchanting about the island is the church of Saint Dwynwyn. It’s just ruins, and reminded me of the ruins of churches in Ireland.

But it’s a big church—as big as the biggest in Ireland, and history says that it was one of the most visited pilgrimage sites in Wales.

It’s in a beautiful spot in the middle of the island. There are four steps of what must have been a cute little round tower attached to the church.

People have made a little shrine in one of the nooks of the church, and even Kevin made his way there!

The island has a special feel to it, like Saint Dwynwyn’s influence is still at work. I love that about a place—I’ve felt it in several, like Glendalough where Saint Kevin is from, or Knock where the Blessed Mother appeared, or Guadalupe, where she also appeared. Holy people make the places they touched holy. You can feel it in a the home of a happy family.

May Saint Dwynwyn bless all of us, for we are all lovers!

Posted by Kevin McKenzie at 3:52 PM