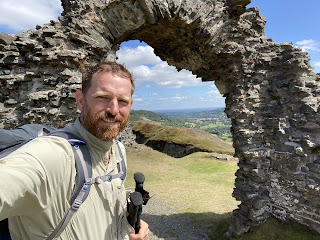 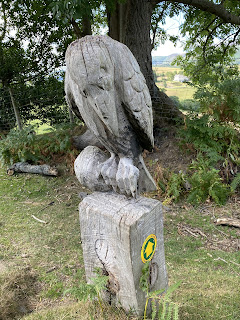 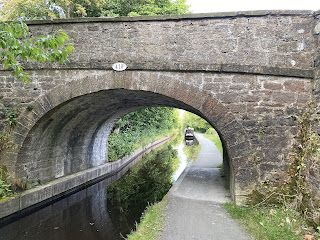 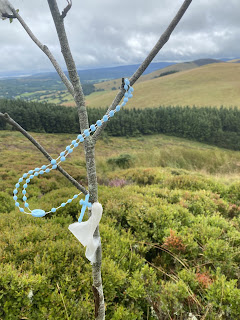 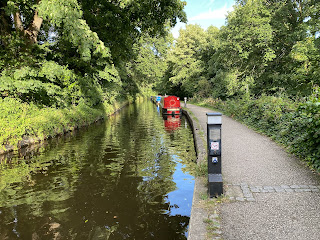 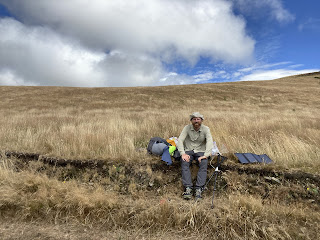 I really did it this time. Or should I say, the hills and byways of Wales did it to me. To my feet!

They are fed up.

You see, yesterday my hydration bladder sprung a leak. I like having water easily available, and though I could have survived without it, I headed into a town to look for a replacement. Which I found, just that my feet also found the section of the store where they had hiking boots.

I’ve been trying to go super-light, so I have been wearing trail running shoes, and sandals at times. While the weight savings are nice, this has proven impossible, I think because I am carrying so much weight on my back.

And so my feet rebelled. All day today and yesterday, whenever I saw a bench, they made their way to it and waited till I sat down and gave them a break. Needless to say, this made for slow going.

The new boots have made them very happy. Now I’m thinking of taking tomorrow off from hiking so that they will be renewed in every way.

I spent last night with Elyssa and Tom, a couple I found through some networking. They were super kind, and having a real bed was a delight.

I guess that after a week or so of sleeping in the wild, the things I appreciate most about a home are

- a real bed to sleep in

- a real roof to keep the rain off

- a shower to clean the grille off my body

- a washer to clean the grime of my clothes

- and it’s fascinating getting to know my hosts!

There had been one thing I lost early on in my pilgrimage and I sorely missed: my rosary. I had brought a brown wooden one, which must have blended in perfectly with the ground at some point. And I love praying the rosary and sometimes the chaplet of divine mercy as I walk.

The other day at church I asked around if there was anywhere I could get a rosary, and the people told me the closest place was 50 miles in the opposite direction.

So I had been using a piece of fisherman’s net that I found on the beach and tied knots in, but I even managed to lose that a few days ago.

I was walking down one of the most remote and wild bits of trail yesterday—one particularly covered in sheep and what sheep leave behind—when I saw what looked like a Mardi Gras necklace hanging from a sapling. I thought to myself, “could that be a rosary?” Then I thought, “of course not, it’s just a necklace, don’t waste your time.”

But I stop for almost everything, so I stopped to check out the necklace, which was actually a light blue rosary draped over that little tree. I took it as a gift from some other pilgrim. And I’m not going to lose it!!!!

That was my little morning miracle.

I also came across more bilberries yesterday, though some mountain bikers I met tell me that here they are called “winberries”. They are delicious, and apparently I’m only tasting the early batch; by the end of August they’ll be the size of grapes.

I had lunch today at some of the most picturesque castle ruins I have ever seen, Castel Dinas Bran.

My trek also took me alongside a working canal. Apparently there are hundreds of miles of canals in the UK. Once used for transporting coal, now they are mostly used by people to move around by houseboat.

What I love about the canal is that it has a level footpath… crucial word is “level”! If I could take a canal footpath the rest of my time through England, I would!

Blessings on you, I’m heading to sleep!

Posted by Kevin McKenzie at 3:17 PM