It’s a gorgeous sunny day here, the temperature is perfect, there are no mosquitoes, there’s a light breeze, and the birds are singing their hearts out. Heaven and earth turned out to celebrate with Pope Francis today!

Vatican City was surrounded by a half-mile wide no-entry zone. There were about 30 police officers on every street corner. I arrived at 6:30am, and they funneled us to the Via della Conciliazione, the street directly in front of Saint Peter’s. The street filled up quickly. At about 6:45, they started letting us in little by little. Once in the square, I managed to find a place by the center aisle with my fellow seminarians. There were tons of people – more than I can count, though not quite as many as at the beatification of John Paul II.


Pope Francis appeared at 8:45am. They drove him all over the square in the same open-topped popemobile that Benedict used. As soon as he appeared, the crowds went crazy. Pope Benedict used to do the same thing, but in recent years it’s been harder for him and usually he just held on and waved. Francis was leaning over both sides of the Pope Mobile waving at people left and right. He went by my aisle twice. The first time - I must have been about 6 inches away from his hand – he leaned over and patted a baby next to me on the head. Everybody loved it. Later on he had them stop the popemobile and he got out to greet and kiss a parapalegic. 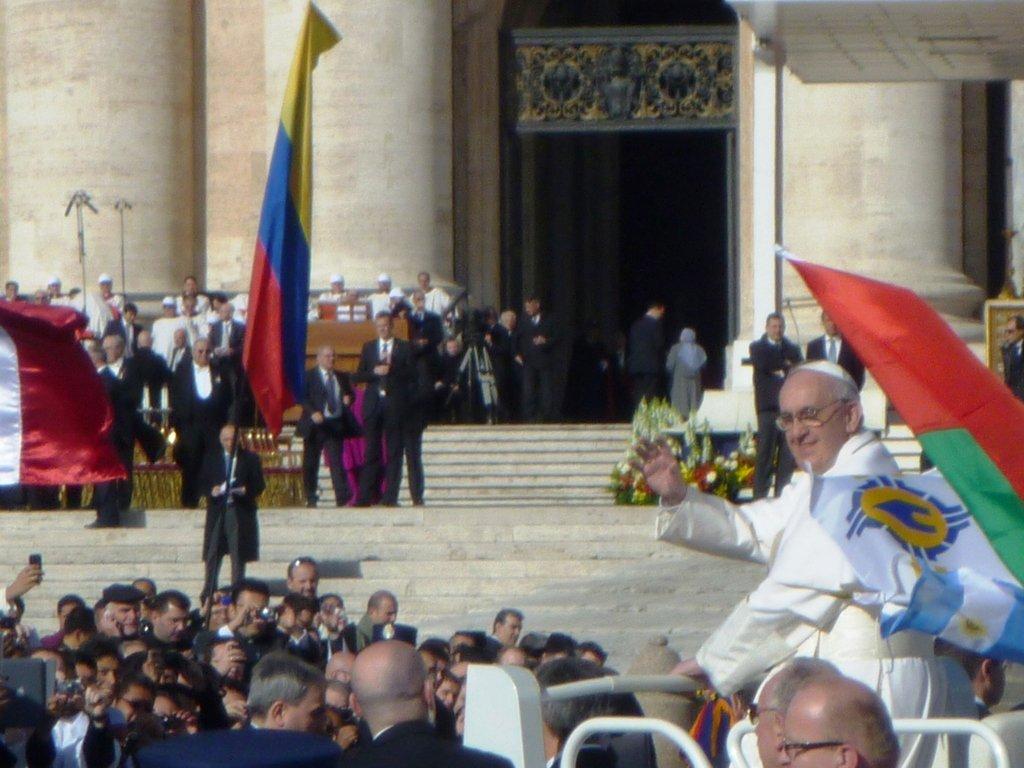 Then the mass began with Francis visiting the tomb of St Peter to entrust his ministry to him. After, he processed into the square preceded by all the Cardinals and Bishops and Patriarchs. The Orthodox Patriarch was there for the first time in over a thousand years.


This was a mass about the mission of Peter’s successor. It’s a mission that I think Francis understands extremely well. He sees himself above all as a shepherd. To begin with, he has kept his simple old pectoral cross with an image of the good shepherd and the sheep. Then he received the Pallium made from white wool which symbolizes his mission to carry us sheep on his shoulders. His homily wasn’t really an official statement of his “program”, it was a call to protect others with tenderness. He focused on Saint Joseph (a big favorite of Pope Francis and it’s his feastday today) and talked about how Joseph was essentially a protector, and how this is his calling as Pope: “To protect Jesus with Mary, to protect the whole of creation, to protect each person, especially the poorest, to protect ourselves: this is a service that the Bishop of Rome is called to carry out, yet one to which all of us are called, so that the star of hope will shine brightly. Let us protect with love all that God has given us!”


He said that each of us too has  a calling to be a protector: “It means respecting each of God’s creatures and respecting the environment in which we live. It means protecting people, showing loving concern for each and every person, especially children, the elderly, those in need, who are often the last we think about. It means caring for one another in our families: husbands and wives first protect one another, and then, as parents, they care for their children, and children themselves, in time, protect their parents. It means building sincere friendships in which we protect one another in trust, respect, and goodness. In the end, everything has been entrusted to our protection, and all of us are responsible for it. Be protectors of God’s gifts!


I recommend we take Francis’ words seriously. “ ‘Protect’, oh, that’s so nice” we might want to say. But let’s go deeper! Isn’t to protect at the heart of what true manhood is? Doesn’t the genius of woman often show itself in an incredible and selfless instinct to protect? Don’t children see themselves in a totally new light when they are first entrusted with someone or something to protect? ( I for one remember so clearly that moment when I was ten and my dad sat me down and told me I had to protect my sisters at school – I felt like a knight in shining armor or some super hero!) Take Francis’ words and run with them. If we spent more time protecting others than worrying about protecting ourselves, maybe the world would be at peace!


Pope Francis had a two-hour time frame in which to finish today’s mass, what with all the visiting heads of state, and he stayed to it. During the mass itself he followed the script very closely. It will be interesting to see him in more relaxed settings like his weekly Wednesday audiences.


It was great seeing Pope Francis close up. He looked me in the eyes, and I could see joy and calm in him. Don’t get me wrong – he doesn’t have the same electricity about him that John Paul did. At 76, Francis is over 20 years older than John Paul was at his election. Francis can be short of breath at times, due to his having lost half a lung when he was young.


But judging from everybody’s reaction today to him today, if this was the ancient church and we still elected our popes by popular acclaim, Francis would have it in the bag!


He’s so spontaneous, who knows where he’ll show up next. This Saturday, me and some friends will be visiting 25 churches across Rome to raise funds for our seminary (www.churchathon.org) and who knows if we might even run across our new Pope!


This first week with Francis has been great and I’m looking forward to getting to know him and listening to his message. Now is when his shepherding really begins! I don’t envy him – he has a lot on his plate and he will definitely be in need of our prayers – he asks for them whenever he speaks.


Let’s do our little part to help!