Day one- blessings and bilberries 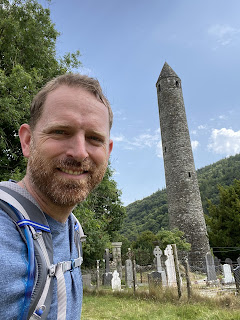 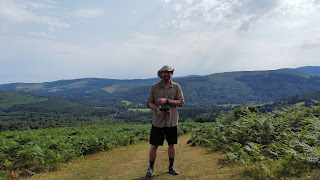 Wow! I did not expect to spend yesterday sick in bed. Nor did I expect to end today gorging on wild bilberries and raspberries. 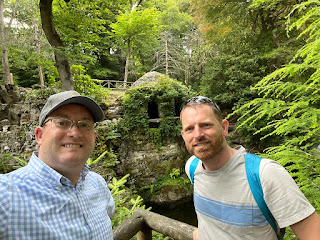 Let’s rewind. I landed in Ireland last Wednesday, and my friend Father Robert picked me up and took me up to Northern Ireland. I hadn’t seen him in… maybe 18 years, so it was really nice to catch up. He cooked some amazing meals for me, and gave me the grand tour of Belfast and its surroundings. Staying with him gave me a chance to get over my jet lag too.

Then I took a train down to Dublin on Saturday, where a friend picked me up and drove me to Glendalough, the place where Saint Kevin lived and where I wanted to start my pilgrimage from. 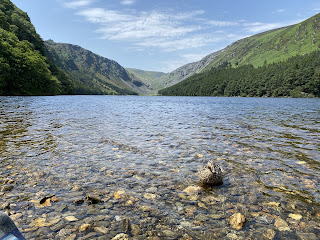 It was so good to be back. If you’ve never been to Glendalough it’s one of those places that you at least have to spend a day in before you die. “Beautiful” is a terrible understatement. Saint Kevin was drawn there around the age of twelve. There are two icy lakes and mountains all around, and a cave in a cliff that Kevin used to live in. Nowadays the valley is filled with the ruins of the stone churches from Kevin’s monastery.

I spent the afternoon wandering around like a boy in a toy store. When I woke up the next morning, something was wrong. I wasn’t hungry! I soon realized that somehow I must have contracted e. Coli, otherwise known as travelers’ diarrhea—no fun!

So I checked into a bed & breakfast, tried to stay hydrated, and slept my heart out.

When I woke up this morning, I was feeling much better, so I headed to the site of Saint Kevin’s Cell, from where I wanted to start my journey.

Along the way, I took a dip in the upper lake. Usually it’s so cold i don’t manage more than sticking a toe in… today it was just perfect. Supposedly Ireland is having a heat wave. Today it got up to 80! I try to remind the Irish that it was 105 in St Louis before I came. 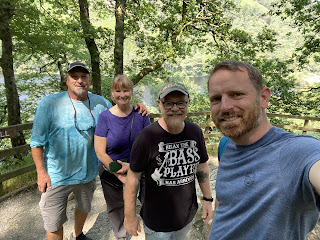 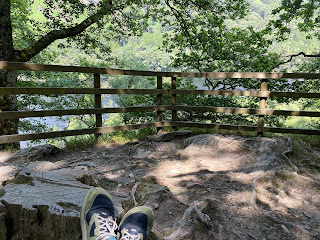 After my swim I headed up to Saint Kevin’s Cell, where he had a little stone beehive hut overlooking the lake. While I was praying there, three people came up. I crashed their conversation, and they were some wonderful people: Sammy Horner, a musician, and some friends of his from Nevada. They prayed for me and even insisted on giving me money for my dinner! What a blessing!

Then I was off. I passed through many of the churches connected with Kevin, and then headed out north on the Wicklow Way towards Dublin.

Some of the path was forest, some fields. Sheep wandered about—and sat blocking my way—almost everywhere. It was a sunny, glorious day with beautiful views in abundance.

Along the way, I went swimming in two streams. I’ve decided that if I can’t shower, I might as well use the showers God provides. That way maybe I won’t end up smelling like one of these sheep! 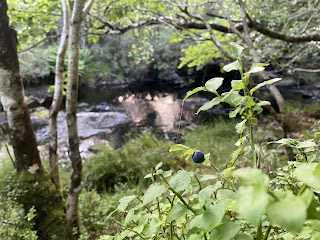 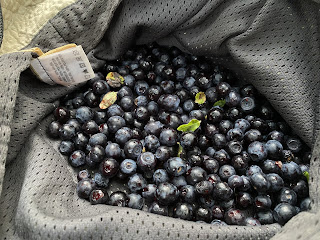 As I drew closer to where I was going to spend the night, I found wild raspberries growing along the trail. Then later I went fishing but caught nothing. The real catch was what I stumbled upon after along the banks of the river: bilberries. They’re related to blueberries but aren’t as sweet. And there are gobs of them.

So even though I couldn’t buy dinner on Sammy and his friends, I had a pretty good dinner. And I will have that dinner on Sammy, as soon as I come across a good restaurant!

All in all, I feel very blessed. Stomach bugs make you feel pretty horrible, so yesterday everything seemed pretty hopeless. But sleeping for 12 hours straight sure helped, and I know that this first wonderful day on the trail is only the first of many kinds of wonderful days.

Kevin set out on this same journey, five times perhaps, and he too had harder days, days when maybe even he caught stomach bugs. But he kept going, one foot in front of the other, and when he couldn’t even manage that, I’m sure he crossed those feet and went to sleep too.

Today I walked from Glendalough to Oldbridge. Tomorrow I’ll continue my way North, hopefully making it to the Glencree River.

Many blessings on you, say a prayer for me if you’d like!

Ps just discovered my charging cables fell out somewhere. So who knows when I’ll be able to post again!