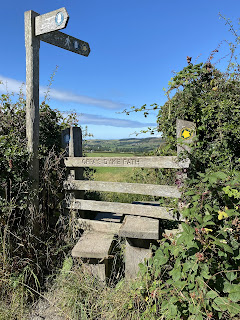 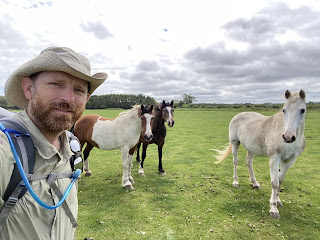 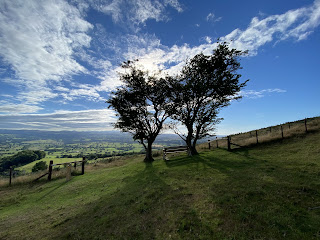 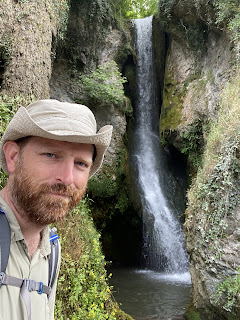 I’ve left the coast and headed up into the hills. I’m following Offa’s Dyke Path, a trail that winds along the border between Wales and England. Offa was the 8th century king of Mercia, and he built a giant earthenwork dyke as a border for his kingdom.

Already, I’m doing more climbing than any day these past two weeks. Some of the views have been tremendous, with the sea to the north and beautiful rolling farmland to east, west, and south.

Right now I’m in the town of Bodfari.

This morning I went to church at St Ilytud’s parish in Rhuddlan. Afterwords, they served tea and biscuits and I got to chat with the parishioners. Kind of like “donut Sunday” back home in St Louis!

After mass I visited Dyserth, where Saint Kevin built a church. The church there today is much more recent. What I wanted to see was why Kevin would build a church there. You see, Glendalough, where I started my pilgrimage and where Kevin built his monastery, is one of the most ethereally beautiful and majestic places on the planet, in my humble opinion. Then there was that little church on the tidal island off the coast of Anglesey Island that was so pretty that Kevin founded.

And there in Dyserth, I found the same fingerprint that the other two places had: tremendous beauty. Just to the right of the church was a narrow, hundred-foot waterfall that plunged into a deep pool. Green green moss grew all down its length. It roared and filled the air with cool mist. It was just the kind of place Kevin would have loved.

I’m enjoying getting to know Kevin by visiting the places he loved, as well as by feeling what it was like to do a pilgrimage like he did to Rome.

How does that feel? Sore feet! Achy joints! Thorns and lots of them!

Doug, the man who sat in front of me in church this morning, promised that he would pray for me every day of my pilgrimage.

A little girl who I met while climbing up behind Saint Kevin’s waterfall really liked my sandals, and’s said she thought I looked like prince Harry.  Her  little brother said he wanted to do a pilgrimage like me one day.

I reached out to someone else looking for a place to stay, and they offered to give me their own bed in two night’s time.

Kevin most certainly experienced the same. There were probably less roads and less fences in his day, but the world was much the same, and so were people.

And that’s a good thing!

Posted by Kevin McKenzie at 2:27 PM