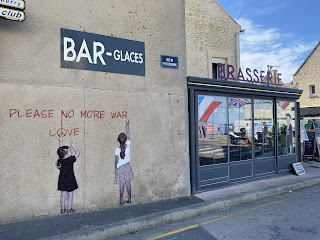 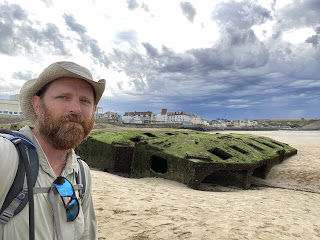 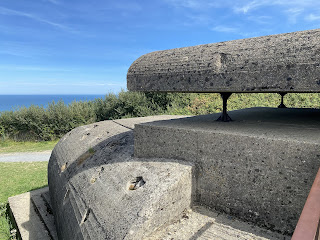 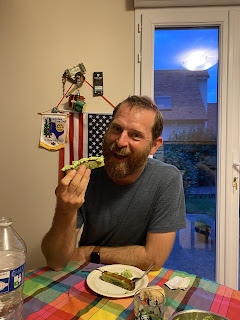 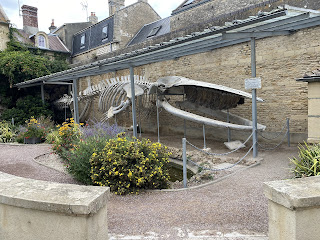 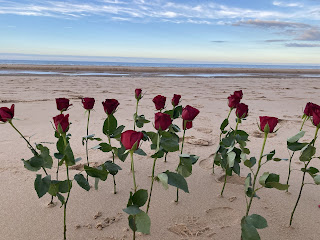 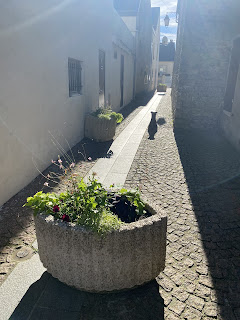 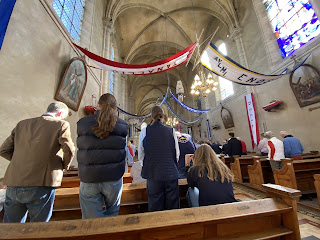 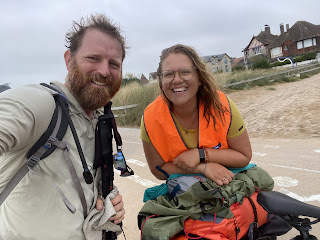 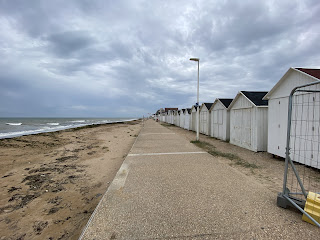 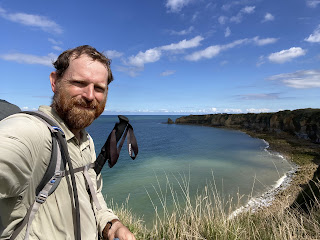 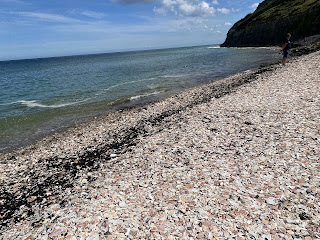 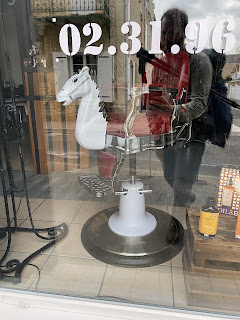 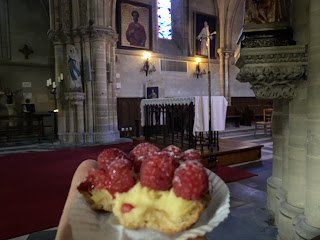 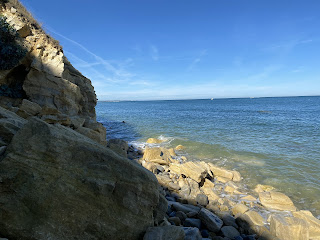 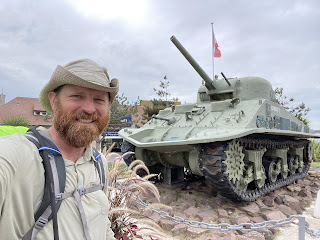 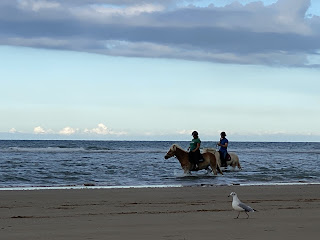 During that time I’ve passed through four countries (Ireland, Wales, England, and France), walked over 600 miles or about 1000 kilometers, and managed to get only one blister. I’ve camped out in the wild 52 nights. I like camping in the wild.

Though last night I was blessed to stay at the house of a very kind woman in Luc-Sur-Mer, and have my first shower in two weeks. Hurray for warm showers!

My regular bathing situation during this time has been my daily dip in the Atlantic Ocean. What inspires me is seeing people in their sixties and seventies every day who calmly walk down to the water and jump in. “If they can do it, then I can too!” I think.

It has been fascinating walking along the beach. There seem to always be people hunting for something or other. Yesterday it was mussels. Today it was clams.

There are families building sand castles, or digging holes to China. There are old people and young, groups of students, and other hikers like myself as well.

Today I met a German woman who is riding from Cologne to the Canary Islands. She taught me how to play a great game called Country, City, River. I encouraged her to jump in the ocean.

The woman who put me up last night is leaving in October for New Zealand to bike around the islands for three months.

It’s become very clear to me that I underestimated how much time I would need to get to Rome. If I continue walking at the same pace, averaging about ten miles a day, I will only make it to Paris by the time of my return ticket to the US in October.

I suppose I could extend my stay in Europe, and try to make it all the way to Rome. I could also hitchhike or take a train across parts of France and Italy and make it to Rome on time that way.

But I knew setting out that my plans were going to be flexible. I mean, my feet are really in charge, and they don’t follow any clock or calendar. I’ve found that they do best with frequent breaks and a good massage at the end of each day.

I’ve also found each day so fascinating, from the slowly-changing terrain to the interesting people that I meet. Looking back on my route, I see many places where I could have cut some distance off. I could have just taken a ferry from Ireland straight to France. I could have skipped Normandy altogether as well.

But I really wanted to see England. It’s been an important part of my life through so many of my favorite authors: Charles Dickens, Robert Louis Stevenson, John Buchan, James Herriot, JRR Tolkien, CS Lewis, Bill Bryson, Lloyd Alexander, Brian Jacques, PG Wodehouse, Ruth Burrows, Shakespeare and many others. England is also in some way the Alma Mater of my own country. So much of what we love and live comes from what the British gave us. I thoroughly enjoyed my time there, and I’m so glad I walked through it.

I also wanted to visit Normandy. Growing up, there was a bluff in my town with a beautiful view that we used to call “Normandy”. I wanted to see the real thing. I also really wanted to see the Dday beaches. Though I haven’t finished passing through Normand yet, I have not been disappointed. I really loved the wilder parts on the Cotentin peninsula. But the seaside towns have their own charm as well, especially for me the town of Luc-Sur-Mer where I spent the night yesterday. They have a park called “Parc de la Baleine” Baleine means whale. Apparently, in the 1800’s, a whale beached itself on the town beach and died. The townsfolk took the skeleton and put it in their park, where it remains to this day. It was pretty shocking to see, it almost felt like walking into an outdoor natural history museum.

The food in France has not disappointed either. This morning, my host found some croissants that were unlike anything I’ve ever tasted before. They were crunchy and chewy and… I felt like somebody had given me fire for the first time—I want to learn how to make them!!!

So I’m content, even if I don’t make it to Rome this time. I’m leaning towards heading home like I had planned in mid-October, just from Paris instead of Rome. Then perhaps I can fly back to Paris some day and finish my pilgrimage.

Anyhow, I still have a month left. And I’m looking forward to all that it holds. There have been surprises every day; I’m sure they will continue. That’s what pilgrimages are made of.

Posted by Kevin McKenzie at 1:53 PM