First impressions of France and Why I’m Here 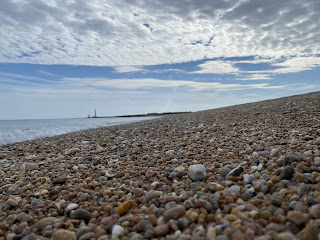 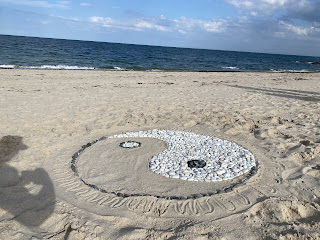 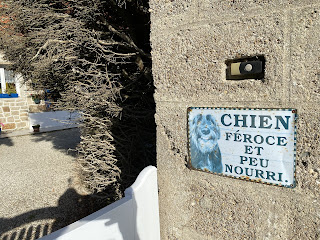 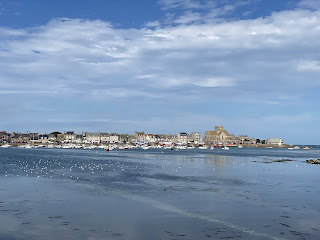 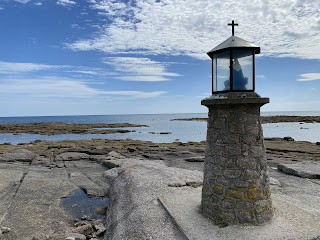 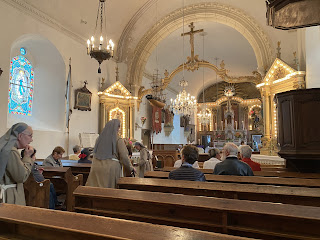 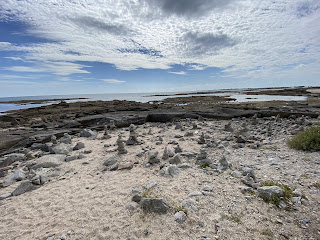 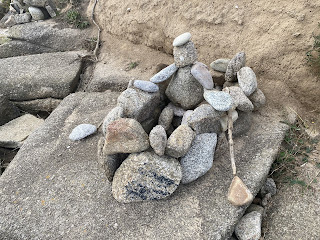 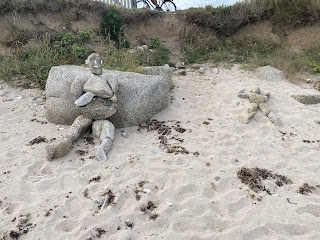 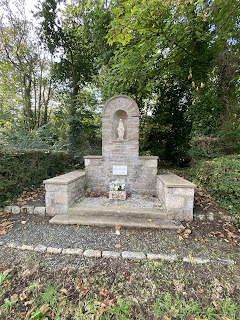 Different is good in my book, though.

I’ve been walking along the coast all day, every day. There’s an established path a bit away from the water, but I like to walk along the shoreline just out of reach of the waves. Where I come from, Missouri, we’re about as far from the ocean as is humanly possible, so I’m trying to soak in the sun and waves and all of it while I can.

And it’s wonderful: clean beaches, crystal-clear water, shore birds of every sort, edible seashore plants like Sea Purslane and Sea Kale. For dinner this evening I made a Sea Purslane, cheese and salami quiche, my own recipe! The other night, I made some yummy bruschetta.

There are cute little inlets, and fishing villages, and churches, and chateaus—you name it.

The only problem is… the people speak a different language here. Can you believe it?

So I’m doing my best to learn it as quick as possible.

I’m fluent in Spanish and Italian, but French is very different. I’ve talked to lots of people here, and understood maybe half of what has been said.

The French people are definitely artists. Their food is beautiful and tastes just as good as it looks. I love their crepes and baguettes especially.

You can tell the care they have put into their houses, and gardens, and patios. Along the beach today I found a sculpture garden and then I found a man, Greg, making a giant Yin/Yang sculpture. I helped him find the rocks he needed to finish it. Between my French, and his and his wife and his mother’s English, we managed to have a conversation. They even drove me to a place where there were some trees for me to hang up my hammock.

It’s wonderful walking along the seashore, because if you are hot or tired, you can just jump in the water. September is also nice, because the beaches aren’t crowded at all. I went swimming three times today.

Yesterday I went to church in a little town, and, like in England, the parishioners sing every verse of every song. I like that. They also had a beautiful model of a ship hanging from the ceiling. Turns out that’s in gratitude for sailors who escaped a shipwreck. Pretty neat, we don’t have those in Missouri! Though maybe we should hang models of tornados or pictures of floods in our churches.

Another church I visited, in Quettehou, was where King Edward III knighted his son Edward, the black prince, just before starting the Hundred Years’ War.

A few people have asked why I’m still doing this pilgrimage since I’ve already finished my book on Saint Kevin.

The short answer is: because I can. I spent the last 26 years of my life in the seminary and the priesthood, and I wasn’t really able to choose where I went or what I did. There’s something wonderful to being able to do that now. And I’ve always wanted to go on some kind of long adventure like this.

Of course, I do still want to finish Saint Kevin’s pilgrimage, even if I have already finished writing his book. And I loved visiting and getting to know Wales and England, two places I had never been. So far it’s been just as fascinating getting to know France.

And there’s something magical to just having a path before my feet and a pack on my back. As I take my first few steps each day, there’s a wonderful feeling I get. And that feeling doesn’t go away throughout the day, except for when I step on a thorn or run out of water or something!

Some have hazarded that this is my chance to “find myself”. I don’t think it’s quite that in my case, but it most certainly is a chance for me to think and pray and reflect about how I will spend the years ahead of me. Having dedicated so much of my life to the priesthood, I feel like some time to ponder what’s next is of the essence.

I loved being a priest. It’s a charmed life. But in my case, it was also a lonely life. Sure, you have the support and closeness of all the people you serve, and the brotherhood of other priests as well. When they asked me if I wanted to be a priest and live celibately all my life, I said yes and I meant it.

At the same time, I don’t think I fully understood what I was taking upon myself. How could I have? How could any young man who follows such a calling?

Things came to a head when I simply found that I couldn’t do what I had been doing all those years. I knew something was off, but couldn’t quite put my finger on it. It was the principal of the school I was chaplain at who alerted me to it. “Father Kevin, something’s wrong, you’re not yourself,” she told me one day. She was right. I had been feeling like a truck that is going along just fine, and then it runs into quicksand and almost comes to a screeching halt.

So I asked for a change, and some time to look into all this. I didn’t have any explanations for people, so I gave none.

After about nine months of serious personal reflection, and help and advice from many good people, I realized that I simply didn’t want to live life alone. I wanted to share my life with someone. And I always had wanted to do that.

During my time in the seminary, this had come up many times in conversations with my spiritual director. Back then, the group of priests I belonged to was really just getting started, and the people I went to for counsel were all inexperienced.

In a normal seminary, the way things should work is this: each seminarian has a spiritual director and another person who is his superior. The superior’s role is to help with everything practical, and to look out for the good of the seminary. That means letting in the men he thinks will make good priests, and keeping out the others. If he thinks a young man should be a priest, he encourages him to continue on in the seminary.

The spiritual director, on the other hand, is there for the spiritual good of the young man. He isn’t trying to get anyone to stay at the seminary; all he is looking for is the holiness and wholeness of those whom he has the care of. Even if the superior thinks a young man should be a priest, the spiritual director might think otherwise. In that case, he acts as a kind of “devil’s advocate”, encouraging the young man to look elsewhere for his calling in life.

In the group of priests I belonged to, those two roles were melded into one. My superior was my spiritual director as well. In effect, this meant that the person I went to for honest advice and direction was also tasked with trying to keep me in the seminary.

I did have the qualities needed to become a priest. I believe I was a good priest. I know I helped many, many people.

But it’s one thing to be able to be a priest, and it’s another to thrive being a priest. I was doing the work of a priest just fine. But I felt that the life of a priest wasn’t going to bring me to holiness and wholeness. Something was missing, something I had long desired—that someone to share my life with, and hopefully raise a family with.

So I asked for a dispensation from the priesthood. You don’t ever stop being a priest, but you can stop doing what a priest does. You are an “inactive priest” as one priest told me. If you ask, you can also be allowed to marry.

So that’s where I am. That’s why I’m sitting in a hammock in a thunderstorm in a forest in the French countryside.

I am on an adventure. I am a pilgrim. I am a wild man.

Posted by Kevin McKenzie at 4:50 PM