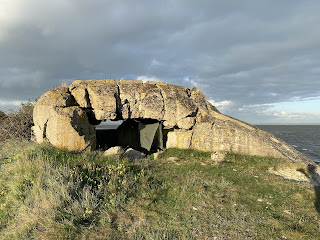 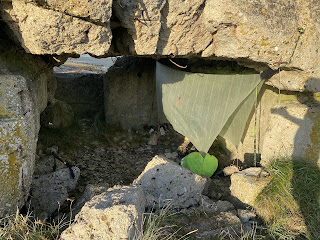 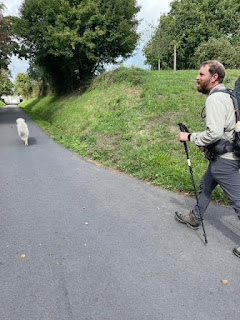 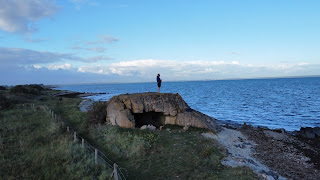 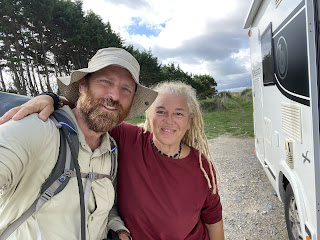 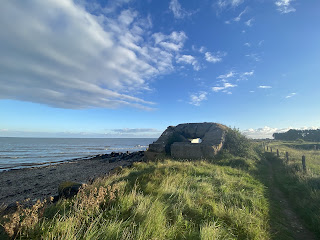 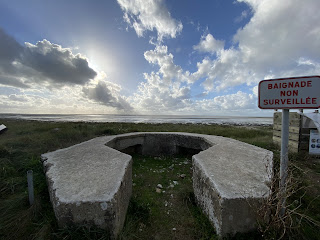 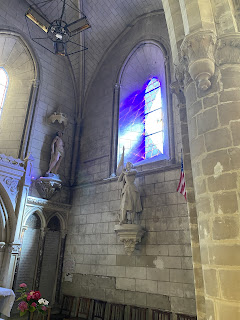 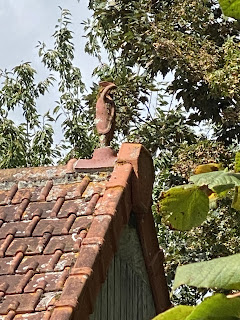 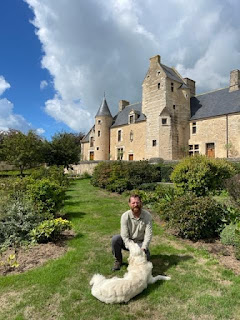 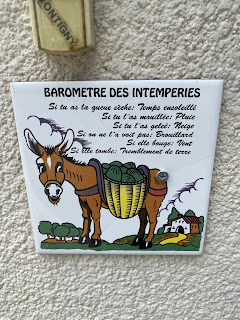 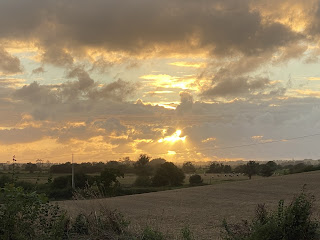 I woke up yesterday morning to rain pattering against the tarp over my head. The night before, I had found a little corner of a field where there were a few trees and a nice fallen trunk to sit on and have my dinner.

The field itself was lit up last night by the setting sun, with puffy clouds floating by over a backdrop of peach and golden sky.

I slept in, hoping the rain would stop. Breaking camp is so much easier when it’s not raining.

Thankfully, the rain did stop by about 9:30. I rolled out of…my hammock, and was happy to see the sun peek it’s head out soon enough. This meant I could charge my batteries while I had breakfast and packed things up.

Keeping my phone and iPad (which I write these blogs on) charged is tricky, especially on cloudy days. On sunny days, I can spread out my solar panels when I’m stopped and point them at the sun, which charges things quite well. I also have the panels hanging off the back of my pack as I walk, which works ok if they’re pointed in the right direction.

I had a breakfast of day-old baguette, butter, raspberry jam, and honey—pretty yummy!

Then I finished packing things up and set out on my way.

I’m following a French walking path called the “Grand Randonee 223”, though last night I detoured quite a bit to find a place to hang my hammock up.

The quickest way to get back on the trail would have been to walk along a pretty big road, with cars zipping past at about 50mph. I decided to take a back road that zigzagged a bit, but wouldn’t have the speeding cars.

First of all, it was a beautiful, quiet road, with cute houses here and there along the way.

Then, a white golden retriever came running out of a yard and right up to me. Now I miss my little golden retriever, Felicity, very much. I wish I could have brought her with me. So it was a delight just to meet this wonderfully affectionate animal.

Then I saw his owner, a woman carrying a basket of tomatoes, and we said hi. I said “Bon jour” and in like two seconds she asked if I spoke English. And she asked it with a perfect American accent.

It turns out that she and her husband had lived in Oklahoma for a long time, and she had grown up in LA.

“Want to join us for lunch?” she asked.

We walked along. She had been swapping tomatoes with her neighbors, since they all grew different varieties. Good idea that!

Then we walked up to this giant old stone manor house, and walked in a side door. Her husband was in the kitchen cooking… can you take a wild guess?—Ratatouille.

Not just any Ratatouille, it was made with fresh vegetables from their garden. Zucchini, tomatoes, garlic, squash… sheer delicious.

It was my first real meal in France, and I’ve been here for a week now. I had tried to go to restaurants many times, but I always seemed to walk into town too early or too late. Everything closes down from about 2-5pm.

It turns out that her husband, the Ratatouille master, had gone to a boarding school like I did when he was young.

Now, I tend to complain a bit about my boarding school days. I was just a boy, far from home, and didn’t get to visit my family much at all.

But this man had me beat. He had gone off to boarding school at the age of five. At his school, they had school every day until 5pm. They got to visit home three times a year for about ten days at a time.

I wouldn’t wish boarding school on anyone, ever. I don’t believe in it. I believe that children belong with their family, at home. The only case where it remotely makes sense to me is when a child’s home is so messed up and abusive that he or she would be safer away at school. But then there is every possibility that the boarding school will be messed up and abusive as well!

Anyway, listening to his experience gave me some perspective on my own.

His wife showed me their garden and shared some of her wisdom with me too. One thing that stuck with me was that she said “why would we share with others anything other than joy? Why share bitterness or anger with others? Why spread that?”

She had certainly shared tremendous joy with me. To meet a scruffy vagabond like myself along the road and spontaneously invite me into her home to share a meal made me feel like I had been placed inside the parable of the Good Samaritan, and I was the beneficiary of the Samaritan’s kindness.

She filled my bag with apples and grapes and all kinds of fruit and vegetables from their garden, and sent me on my way a happy man. I was almost dancing as I waved goodbye and continued on my way.

Then I came to the town of Isigny-Sur-Mer. Isigny is famous for their butter and cheese and carmels. They also claim to be where Walt Disney’s ancestors (D’Isigny) are from.

I spent some time resting in the church there. Like the other churches I have visited in Normandy, it looked old but also very beat up. Apparently all of the stained glass windows had been blown out during the Dday invasion. But it was still nice to have a quiet place to sit and pray and rest.

Afterwards, I meandered around town, stocked up on baguettes, and bought a delicious chocolate eclaire.

Then I headed out of town and off to the coast. Along the way I found some of the sweetest tasting blackberries I have found this whole time. I also chatted with my mom. She fills me in on news back home and I fill her in on my news. I figure she can pass the word along to the rest of my family.

The coast here is full of oyster beds. The other day, I found an oyster on the beach and had it for dinner. It tasted like butter almost.

As always, around 6pm I start looking for a place to hang up my hammock. It’s hard around the coast, since there aren’t as many trees as there are inland. Many days, I’ve had to walk far to find two trees the right distance apart. I’ve wondered if bringing a tent would have been a better idea. But the trees are always there, and I sleep so well in my hammock. And it’s so lightweight.

I did pass one house where I saw some possibly good trees in the side yard, and I was tempted to stop and ask if I could set up my hammock there. But that was about 5pm, and I wanted to keep walking.

Then about 7pm, I came across a WWII German Bunker. It must have housed one of their cannons, and it was pointed out towards the ocean, just south of where the American soldiers landed at Omaha beach on DDay.

Most of the bunkers I’ve passed have been completely intact, if filled in with sand or overgrown with brambles. This one, though, was blown open, I’m guessing by an Allied shell.

I’ve only ever hung my hammock from trees so far. But there was all this exposed rebar inside the bunker, and part of the inside was shielded from the wind.

It took some creativity, but I found two pieces that were not totally rusted through, and got my hammock up. Then I sat down to a delicious dinner. Just outside the bunker there was some Sea Purslane growing. I sautéed it up, along with some parsley the woman had given me from her garden earlier, and put them in some scrambled eggs. I also made a packet of Vermicelli soup, some hot cocoa, and devoured a baguette with the help of my butter, honey, and jam.

My sister Marianne called and we chatted a good bit. She’s the family expert on France, since she lived in Corsica for a year. She also just got back from Universal Studios. And she turns 30 today! Happy Birthday Marianne!

After dinner, I climbed up to the top of the bunker to watch the sunset and finish my hot cocoa and my baguette. I had a 360 degree view. The clouds were stunning, and as the sun dipped behind the sea, a full moon appeared from the fields behind me.

What a beautiful day. What a beautiful evening. It made me jump to my feet. I had to dance. I put my earbuds in, and danced for about an hour on top of the bunker, the wind almost blowing me off, the moon rising up through the clouds, the tide rising high, lapping against the concrete beneath me.

This morning I woke to a light breeze, climbed out of my bunker, and had some breakfast. Then I walked down the coast, and ran into an Italian woman in a camper van who offered me some coffee. My breakfast was complete! We talked for about an hour, and then I continued on.

What a wonderful time, wonderful in a special way because of the good people I met, and the beautiful places I’ve found.

You never know where you’ll end up when you tumble of your hammock in the morning!!!!

Posted by Kevin McKenzie at 4:45 AM