Rain and rainbows on Utah Beach 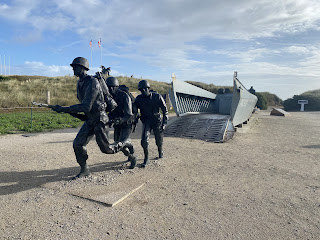 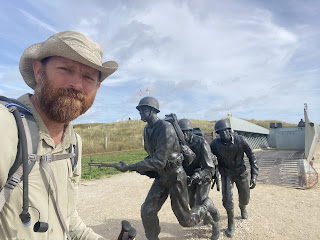 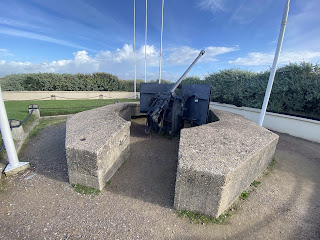 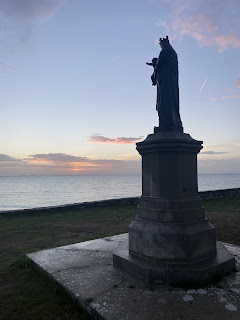 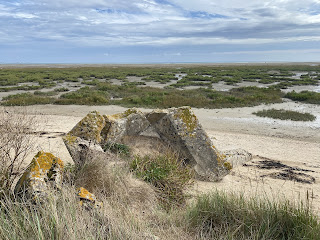 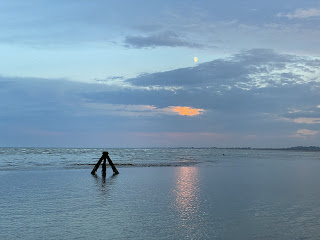 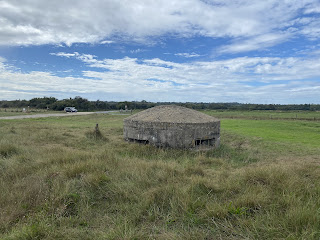 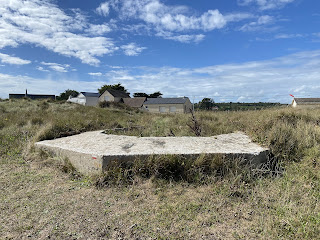 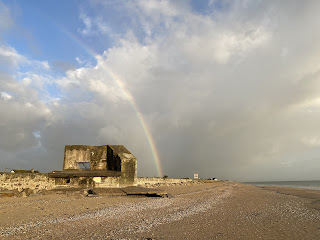 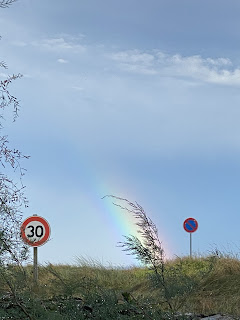 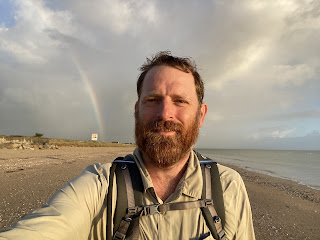 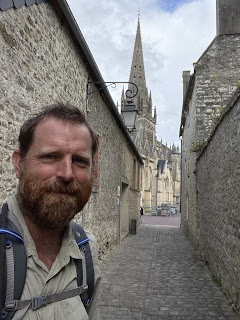 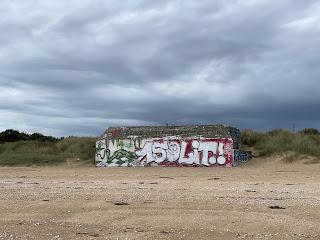 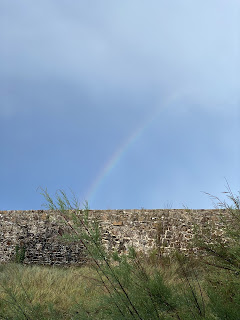 It’s been raining, quite a bit these days.

Now the rain wouldn’t be so bad if it were steady, or even just strong. But it’s been all over the place.

Two nights ago I was trying to set up camp when the sideways rain came. There was no escaping it. Of course, it was blowing at me together with a hundred mile-per-hour wind. It almost swept my tarp and hammock away.

Yesterday it must have rained about fifteen or twenty separate times. I would take off my pack and put on its rain cover, and pull out my umbrella, and then the rain would stop. Ugh.

On the bright side, I think I saw maybe fifteen or twenty rainbows. And somehow in the midst of all that rain, I got to see the stars super clearly at night, and the sun rise as a glowing orb straight up out of the sea in the morning.

Yesterday I made it to the first of the D-Day beaches, Utah Beach. I’ve already walked maybe a hundred miles of beach in Normandy, so it wasn’t physically all that different from the other beaches.

But just knowing what happened there, reading the stories and standing in the actual places, was very moving.

After Utah beach, I got a little taste of what it might have been like for those troops and paratroopers on D-Day.

I had decided to not follow the trail. It wanted to take me away from the beach and inland on a road. I don’t like roads. They are hard on your feet, and you spend the whole time hoping you won’t be run over by the next car.

My beach route started out okay. I had this huge, half-a-mile wide beach to myself.

Then it became marsh. Instead of sand, there was a bit of mud. Not bad, I could handle that.

Then, when I should have found a trail, there was a drainage ditch too wide and deep for me to cross.

So I had to stumble through some brambles… for about a mile. Then I had to climb over a barbed wire fence, and walk through a cow pasture. When the cows saw me, they looked like they had never seen a human being. They started following me en masse.

Finally, I had to lay a plank across another drainage ditch, climb through a hedge, and walk through a construction zone.

Apparently, when the troops landed, the Germans had flooded all of the fields behind the beaches. I can only imagine how frustrating their travel must have been, with the added constant danger of being shot by friend and foe, or stepping on a mine.

All of it made me even more grateful for their sacrifice.

Coming here, knowing what happened here, can’t help but affect you. At least it’s definitely affecting me. I feel like God is drawing me into a kind of retreat, a time alone with him as I walk these beaches.

I’ve been praying, and reflecting, and listening to a few good books.

I guess one of the big themes has just been that: the sacrifice that these men made. They literally walked into the jaws of death. They did it for their companions, for their families, for those they loved, for their countries.

War is a horrible horrible thing. But it does reveal some fundamental things about us. It unmasks evil and shows it for what it truly is: small, petty, selfish, and stupid. The French have decided to leave all of the German fortifications in place along the beaches of Normandy. Since landing in Cherbourg, I think I’ve seen hundreds of pillboxes, and fortified gun positions; giant concrete behemoths. Many are blown open, many others are still almost entirely intact.

Nowadays some are covered in graffiti. All of them are reminders of how temporary Hitler’s grasp on Europe was. Back then, Hitler thought he was cementing his grasp over the continent; today they look almost silly, like the little holes that children dig.

Hitler’s grasp over Europe was temporary because of the sacrifice of the Allied soldiers. These were men just like you and me, who had normal lives and sweethearts and homes. The war wasn’t their fault in any way.

But when they were called upon, they came. And they fought.

They were warriors, modern knights, not in shining armor, but in Army green. They offered their strength to bring down the great dragon that was National Socialism.

They are inspiring, in so many ways. Yes, I know there were cowards among them. Apparently some of the paratroopers found a stash of alcohol in a farmhouse the night of D-Day and got drunk.

I’m not talking about those guys. I’m talking about the rest, the vast majority who set aside everything they held dear, and plunged into the attack, ready to give their own lives if that was what was needed.

Something about them really strikes me on a deep level. It brings out tears I didn’t think I had. My own grandfathers fought this same war, though one was bombing U-boats in the Atlantic, and the other was island-hopping in the Pacific. Both of them survived, for which I am very grateful. And both of them carried the weight of the war with them the rest of their lives, each in their own way. My great-grandfather had fought in the First World War, and eventually died from the effects of the poison gas he was subjected to.

I am extremely grateful for what these men teach us. This is who men really are, deep down. We are called to be warriors for those we love. We are called to stand in the breach and fight the forces of evil. We don’t stand by and idly watch. No, we go out there and do battle.

Most of the time, this might not be so clear and so easy to see. Most of the time, we are to use our strength to build, not destroy, and that is a much slower and much less dramatic effort. Fighting a bad guy who isn’t as clearly evil and as clearly defined as a Hitler requires greater care and endurance in some ways.

In some ways, it might even be more difficult. Forgiving someone who has wronged me sometimes seems like a years’ long war. Carrying on a living relationship with God can be a battle in its own right. Navigating through countless relationships, each with its own mines and pitfalls, sometimes seems like an impossible task. Just having and nurturing good friendships as a man can be a challenge.

But these men fought the battle. They weren’t perfect, my own parents could tell you that.

But they did what they could, when it mattered most. For that, I am grateful. Walking on these beaches and in these fields where they fought, it feels like I’m setting foot on very holy ground.

Posted by Kevin McKenzie at 3:40 PM