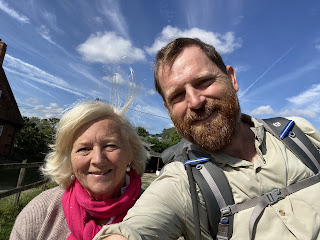 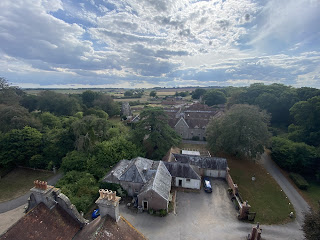 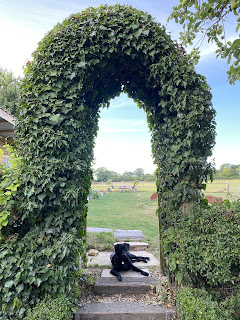 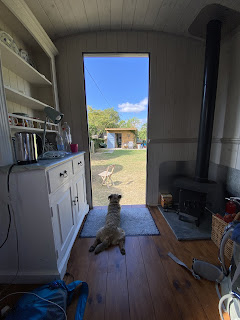 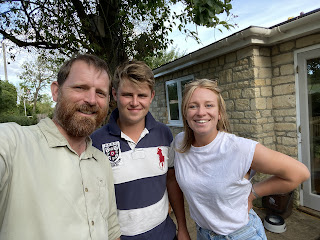 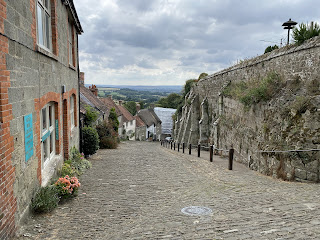 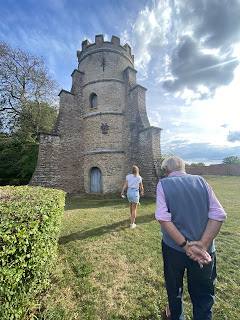 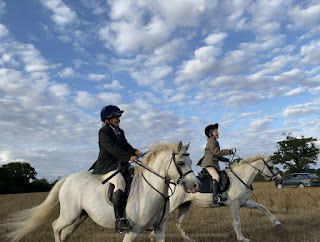 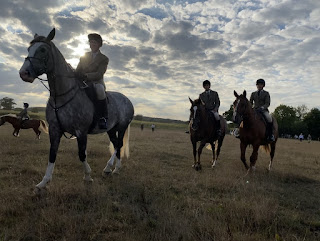 On a walk like this, you come across all kinds of people, most of whom you will probably never see again in your life. Some say hi, some don’t. For some people I think my long beard and weather-beaten appearance can be a bit scary. Others are more courageous and talk to this scruffy stranger.

On Sunday evening, my feet were complaining, my legs were achy, my body was sun-scorched and I was hungry. I had only walked that day because I had wanted to get to church in the morning, and now I was looking for a pub to get some dinner in and a place to hang my hammock.

The last few fields I had passed through following the footpath didn’t have gates, just electric fences that you had to hop over—not a good idea, Farmer Brown!

Then I came to one last field before the town of Marnhull. At the far end, I saw a man and a woman walking their dogs. “What luck!” I thought, “for sure they’ll know where a good pub is.” I had heard about this thing called “Sunday Roast”, a meal they only served on Sundays, and I wanted to try it.

For a moment it seemed that the two were hurrying away, trying to avoid me. Then the man turned and asked me where I was going. Neither of them knew anything about the pubs in town, they had only come there to go to church, which had just let out.

Richard was the man’s name. He was shocked to hear that I was walking from Ireland to Rome, and he asked more questions. When I mentioned that I was looking for two trees to hang my hammock from, June, the woman, said that there were two perfect trees in her garden. And she said she would feed me dinner.

Now every evening around 6pm finding two trees is the one concern on my mind. Finding dinner is almost as important. To find two trees like this and to have someone offer me dinner was a godsend, especially considering how tired my body was.

Richard and June were fascinating people. Richard had worked for Christie’s, and was an art expert. We struck it off immediately. I jumped in June’s car with her dogs Molly, a black lab border collie mix and Lotty, a little whipper snapper dog.

Soon we arrived at June’s house, a bed and breakfast called Lawn Cottage in Stour End, Dorset. It was a precious place, with a garden and a great field behind, and a shepherd’s hut (a sort of caravan that serves as an extra guest room). Besides the two dogs, she had four Bantams. The rooster’s name was Boris and he was a fabulous bird.

Richard invited the parish priest over, and soon the four of us we were seated in the back garden having a delicious dinner and lively conversation peppered with all sorts of stories from Richard.

It turned out that the priest was a Benedictine, who knows several of the Benedictine priests who I know from school back home. Small world!

That night, June offered me not only the two trees, but, if I wanted, one of the bedrooms in her house. Which I gladly accepted—it had been 12 nights since I had slept on a bed or taken a shower. Never before has a bed felt so good, never before has a shower felt so delicious.

The next day Richard insisted that I come to see his home, a fabulous place called Inwood House. It is chock-full of beautiful paintings and collections of all sorts: hunting horns, birds’ eggs, friendly society standards, swords, and rifles, to name a few. There’s a tower from which you can see all around for miles, a stables with several horses, and even a water tower that looks like a little castle.

I was fascinated by Richard’s bronze copy of the Laocoon, one of my favorite sculptures of all time, one I visited innumerable times in the Vatican Museums. After having seen the severely damaged original so many times, it was a real treat to see what the original must have looked like when it was first made.

I got to chop wood with Richard’s grandson and meet his daughter and son-in-law and their family and have the best banana bread ever.

June offered to let me stay a few more days at her B&B, and my body gladly accepted. I was able to rest up, finish editing my book about Saint Kevin, AND I SENT IT TO MY PUBLISHER, HOORAY!!!!!!!

Yesterday, Richard invited me to a fox hunt. He used to be the head of the hunt in the local area, the Blackmore Vale, so he knows everybody. I had never seen such a sight—beautiful horses all decked out, and their riders wearing suitcoats and fancy boots and all. Richard introduced me to more people than I can count.

I had read about fox hunts, and remember there being a scene in The Fox and the Hound with a fox hunt in it, but to see one in real life was something else. There were riders of all ages, from little girls and boys on ponies to teenagers all the way to older men and women. They gallivanted back and forth over the fields, and at the end, we all had a barbecue.

At night, June took me to visit a friend of hers who lives in an ancient house with a thatched roof and tremendously thick stone walls. It’s kind of a shocker when you realize that your sitting in a room that is older than my hometown!

Blessed—that’s what these last few days were like with Richard and June. They were like two angels whom I met in that field.

I set out refreshed, ready to trek the last stage before the ferry that will take me to France.

During my time in Great Britain, I have been so impressed by peoples’ hospitality. So many folks have taken me in and treated me like family. Being far from my own family has been the hardest part of this pilgrimage, but all of these families here have made that so much more bearable by inviting me into theirs.

I think that’s kind of like what heaven will be like—being welcome in every family, and everywhere.

Posted by Kevin McKenzie at 3:20 PM